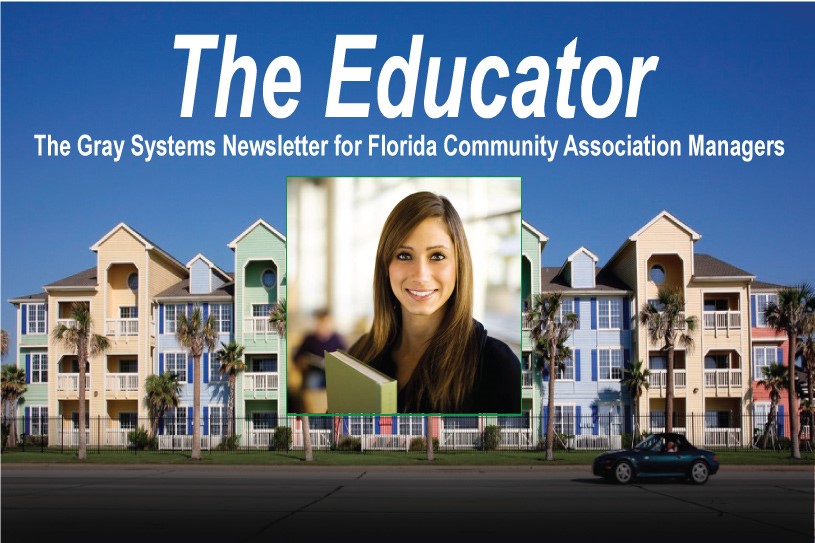 After the Storm
Do you manage a community that was impacted by Hurricane Irma?  Catastrophic weather events are can wreak havoc for a community and unit owners and members may turn to you for assistance in recovering from the storm.
If units within your community were damaged, or perhaps the common areas owned by all, then chances are the damage is covered by insurance.  You can’t give your community members legal advice, but you can help guide them to some answers to some of their questions.

Chapter 627 of the Florida Statutes provide the laws related to everything insurance.  Whether a community member is confused about timing issues involving a claim, or the community management company is dealing with damage to common property, many answers are found within Chapter 627.  This issue of the newsletter provides some insight into two important problems on the minds of property owners:  how long does the insurance company have before they must acknowledge a claim and how long do I have to wait to get paid on my claim?  These questions as well as how long the insurance company has to deny a claim may be answered below in The Law Spot and in Ask Fred.

The staff at GSI is hopeful that their subscribers made it through the storm okay.  If you have a story of courage, heroism, bravery or unbelievable stamina that you would like the newsletter to feature in an upcoming article, please email us.  Communities are more than just the brick, mortar, roofs and swimming pools.  Communities are all about the people who make them home.

How Long Will This Take?
Understanding the Insurance Code

Under section 627.70131(5)(a), F.S., an insurer must pay or deny a claim (or a portion of the claim) within 90 days after an insurer receives notice of an initial, reopened, or supplemental property insurance claim from a policyholder.

When a catastrophic hurricane such as Irma ravages parts of nearly an entire state, the insurance company isn’t required to follow the strict 90 day rule because its failure to pay is caused by factors beyond its control that reasonably prevent such payment.

To keep up with its statutory obligations, however, insurance companies have flocks of agents and adjusters in “staging” areas ready to descend upon an area affected by weather events.  Hundreds upon hundreds of agents from all over the United States waited beyond Florida’s borders for Irma to pass, and then they made their way to Florida to begin the claims process.

Altruistic or self-preservation?  That’s a good question.  Any payment of an initial or supplemental claim made 90 days after the insurer receives notice of the claim, or made more than 15 days after there are no longer factors beyond the control of the insurer which reasonably prevented such payment (whichever is later) accrues interest, potentially costing the insurance company millions.  Late payment of a claim also means that interest began to accrue from the date the insurer received notice of the claim.

Weather events such as Hurricane Irma cause homeowners to have questions about insurance claims.

Question:  I’ve been asked how long a homeowner should expect to wait to hear from their insurance company after filing a claim. Could you point me to the right portion of the Florida Insurance Code?

Answer:  Florida statute 627.70131, F.S., requires an insurer to acknowledge communications regarding a claim within 14 calendar days.  The insurer must review and acknowledge receipt of such communication, but there are some exceptions.  If payment is made within that same period of time, the insurer is not required to meet the 14 day requirement.

Hurricane Irma uncovers another exception to the rule.  The insurance company is not strictly bound by the 14 day acknowledgement period if the failure to acknowledge is caused by factors beyond the control of the insurer which reasonably prevent such acknowledgment.  In times when hundreds upon hundreds of claims are made at once, it may reasonably be assumed that an insurer may be unable to respond to all claimants timely.

If the acknowledgment is not in writing, a notification indicating acknowledgment shall be made in the insurer’s claim file and dated. One requirement in that statute that may help alleviate the claimant’s worry over the claim is that a communication made to or by an agent of an insurer with respect to a claim constitutes communication to or by the insurer. So hearing from the agent allows the claimant the knowledge that their claim has been received and is in the process of review, investigation or settlement.

Thanks for asking,
Fred Gray

Fred Gray is the owner and President of Gray Systems, Inc and is a licensed general contractor in the state of Florida. Fred has been part of the Community Association Manager Continuing Education industry in Florida since 1988.
View all posts by Fred Gray →
Category: CAM Newsletters, Community Association Management, News & Events, Newsletters Tags: After the Storm, ask fred, Insurance Claim, The Law Spot No Comments

Ask Fred-What’s inside may be a part of common elements.

Question: I understand that areas in the condominium I manage are a part of the common elements, but are there any porti... Read More »

The Law Spot-Time Away Serving Counts Toward Licensure

Members of the Florida National Guard or the United States Armed Forces Reserves have a special type of benefit afforded... Read More »

The Law Spot-In the event of an emergency…

The Florida statutes grants emergency powers to associations when damage has been caused by an event and the state has d... Read More »

At Gray Systems, we believe that learning shouldn't end once you step out of the classroom. This blog allows Fred to share his expertise in the Community Association Management (CAM) and Contractor (CILB & ECLB) industries. It's a place to discuss industry related trends, code changes, insight, and know-how.